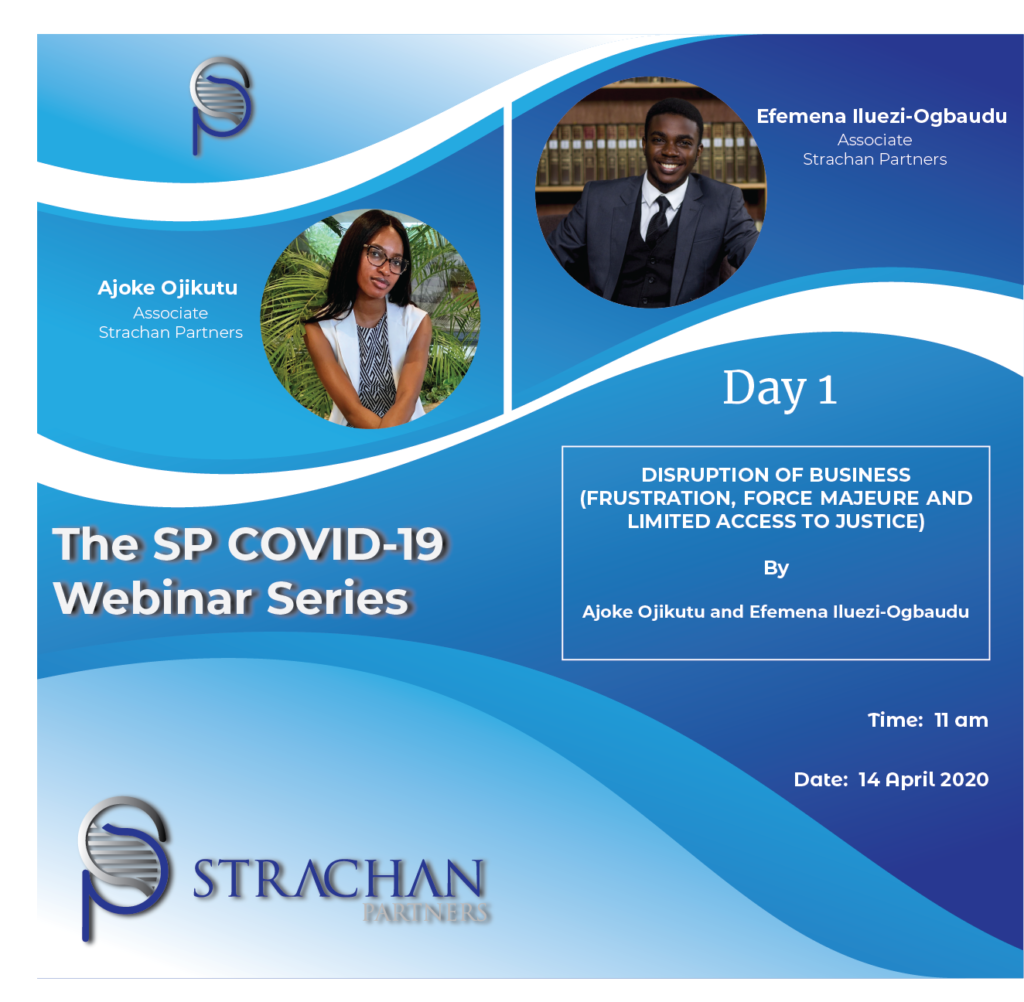 The COVID-19 pandemic has forced governments across the globe to take drastic measures to combat the spread devastating effect of a virus that has affected numerous sectors as predicted by the Director-General of the WHO in his 11th March 2020 speech.

The business sector has been terribly hit and this has seen numerous business and contractual obligations forestalled. As a result, force majeure and the doctrine of frustration have become part and parcel of day-to-day business conversations. While force majeure is a contractual concept which suspends or postpones inter alia parties obligation to perform and absolves such a party from otherwise resultant liability, the doctrine of frustration results in the termination of a contract by operation of law.

In addition, while it is important to note that only parties whose contracts contain a force majeure clause can have recourse to that mechanism in situations of this kind, a successful claim must satisfy certain elements such as the invoking party giving adequate notice of the force majeure event, proof of the occurrence of the event, and the effect of the event on the performance of contractual obligations by parties. Accordingly, it is not enough that the event has rendered performance more difficult than envisaged or that additional cost will be incurred to perform obligations under these circumstances.

Generally, the effect of a successful force majeure claim is dependent on the terms of the contract. Common contractually-stipulated effects include: extension of time to perform, part-performance and the right to terminate the contract. Again, a force majeure claim is only sustainable where the contract between the parties has a clause to that effect. Where this is not the case, the doctrine of frustration will operate to terminate the contract by operation of law. This will, however, only be the case where the elements of frustration are satisfied – (a) the frustrating event is not the fault of either partyand (b) the frustrating event was not forseaable; and (c) the event occurred after the execution of the contract and rendered performance, in effect, impossible.

Justice must not be denied, even where there is a lock down.

On 6th April 2020, the Honourable Chief Justice of the Supreme Court of Nigeria directed all Court to suspend sittings except in matters that are “urgent, essential or time bound according to our extant laws”. The absence of guidelines on access to courts and movement restriction imposed by the lock-down orders ensure Courts are entirely inaccessible.

While Courts across the globe including in the United Kingdom, the Republic of Kenya and Uganda have commenced remote dispute proceedings utilizing basic technology, no such steps have been taken in Nigeria thus ensuring existing and fresh disputes will remain unresolved until the pandemic is defeated. The extension of the lockdown order by the President and the growing number of infected persons in Nigeria means Courts remain closed indefinitely and without any certainty as to when normalcy will be restored.

Dispute resolution is critical to the sustenance of businesses and in light of this uncertainty, we recommend the adoption of Alternative Dispute Resolution mechanisms by parties with bona fide grievances desirous of resolving same efficiently and expeditiously, particularly non-binding forms such as Negotiation and Mediation and binding forms such as arbitration. These mechanisms inherently possess the procedural flexibility to overcome the limitations in place as a result of the COVID-19 pandemic particularly as it relates to the restriction of movement. In arbitrations especially, documents only hearings and remote hearings are not novel. Also, negotiation and mediation sessions can be conducted remotely with parties reaching settlements expeditiously and cost-effectively.

Day 2: HOW BUSINESSES CAN ADAPT TO THE CURRENT STATE OF AFFAIRS (WORKING REMOTELY, DATA PRIVACY & EMPLOYMENT RELATIONS) by Diran Falore and Chiamaka Ibeh 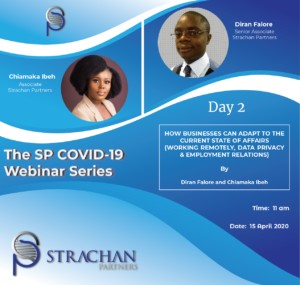 The lock-down period has revealed that office productivity is not limited to gigantic buildings, as many businesses have instructed its employees to continue work from remote places. The necessity of this has however required several structures to be put in place to ensure business progression. Some of these structures include; Policy & Guidelines, Tech Support, Equipment, Environment, etc. And while, technology has guaranteed the continuity of businesses, same cannot be said for people’s job security. Understandably, concerns have risen over employment relations with some employers offering salary cuts, delay in the payment of wages, others on the other hand are considering terminating the employment contract. While the current circumstances at hand may call for drastic actions in a bid to salvage the business’ resources, employers are implored to consider the extant laws on labour relations before taking any step which will negatively affect their employees.

Big Brother is always watching how much do you want him to see or hear?
With the upsurge in the use of internet, no other timing is perfect for people to have a grasp of their data privacy rights. These rights include; – Right to be forgotten, Right to restrict data processing, Right of rectification, Right to be informed, Right to object. The relevance of this knowledge, is for the protection of our PII-(Personal Identifiable Information) from undue leverage by capitalist enterprises trading our data for several figures in without our consent and identity thieves. Ways to protect our data privacy include: software due diligence, reviewing privacy policies of sites before subscribing to their content, disabling cookies, restricting the access of mobile and web applications to contacts, geographical location, camera, audio and video, and do not click on phishing links. 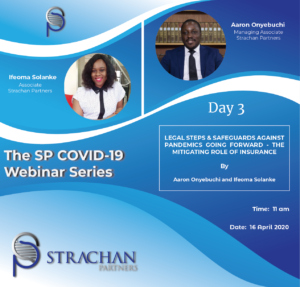 How prepared is your business for this pandemic- or a next?

Losses particularly economic losses are inevitable in times such as this, however, their effects can be cushioned by insurance policies and government intervention schemes such as the stimulus package for MSMEs and households.

On a national scale, the Nigerian government being a low-middle income country is insured against the Corona Virus due to its entitlement to the Pandemic Emergency Financing Facility (PEF), which was established by the World Health Organization in collaboration with World Bank. The facility is a catastrophe risk pool of funds funded by premiums paid by countries and donations from donor organizations. PEF is majorly for the poorest of nations in periods of outbreaks such as this.

On the business scale, the suitable insurance policy in face of this pandemic is the business interruption insurance, which covers the loss of income that a business suffers in the event that business is halted for some reason, such as a fire or a natural disaster. However, it appears that the anticipated risks by corporations and insurance companies under this type of insurance do not include pandemics such as the Covid-19, hence not much can be done for losses suffered by corporations, in this regard. Nonetheless, some companies may be lucky to have buffers for their losses based on the language of their insurance policy and if they took out extended policies.

It is instructive to note that before claims can be made under this insurance policy, premium must have been paid in advance and in full as no premium, no cover.

Progression inspite of a pandemic- Yemi Candide-Johnson (SAN)
Individuals understand the relevance of progression to humanity. Hence, while we agree that the current event at hand is unpleasant, it is relieving to know that systems are fast adapting to the current trends. Business meetings and conferences are now held online, remote judgments and rulings are now a norm, some courts have adopted virtual hearings, etc. and with alternatives such as this, less time is expended in achieving tangible results.

Kindly note that our Webinar on the COVID-19 series is intended to provide a general guide on issues discussed. For further discussion on any of the above areas, kindly send an email to info@strachanpartners.com